What’s the Best Monitor for a Trading Computer? 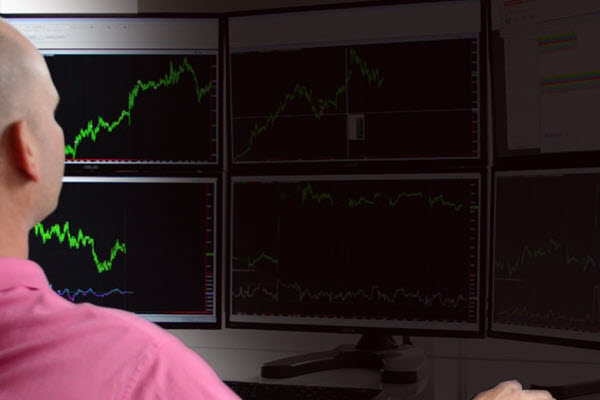 Like most traders, you probably spend your days and nights staring at computer monitors. It makes sense to find out if you are using the right kind of display and what the differences are. LED-backlit displays are what we recommend.

In today’s post, we’ll review the difference between technologies and explain why we recommend LED-backlit monitors for stock trading.

Although you’ll hear people ask about LCD vs LED, the truth is most monitors today are still LCD. What’s different is how they are lit.

LCD stands for Liquid Crystal Display. Calculators and handheld gaming consoles have been using LCDs for a long time. However, an LCD doesn’t have any light of its own. So you need light to see an LCD screen.

Initially, LCD manufacturers used Cold Cathode Fluorescent Lamps (CCFLs) to solve the problem. However, CCFLs were heavy and energy inefficient. The color brightness was hard to control, and they took a while to warm up.

LED stands for Light Emitting Diode. A pure LED display (as opposed to an LED-backlit LCD display) uses LEDs for each pixel of the image. Due to the high contrast, these displays can be seen from far away. Large-format displays use this technology for concerts and stadiums.

The problem with LED displays is they are too harsh for close viewing. The compromise, especially for monitors where close viewing is critical, was to develop an LCD monitor that’s lit using LEDs.

Later, the introduction of RG phosphor monitors and RGB LED technology improved the picture quality. This led to the wide adoption of LED-backlit technology.

It’s important to mention that some manufacturers also use edge-lit LED technology where the LEDs are not directly in the back of the display, but rather on the side. The edge light is diffused evenly to the screen. Edge-lit LEDs are used in smaller displays like smartphones. This technology is cheaper than direct backlit.

LED-backlit displays use “local dimming” to improve the contrast ratio. Various manufacturers also use Pulse Width Modulation (PWM) and Direct Current (DC) to control the screen brightness. For some users, PWM flickering can be uncomfortable.

Slimmer and Lighter: LED-backlit monitors are significantly slimmer and lighter than CCFL technology. The smaller size and weight makes LED backlit displays great for wall mounting. They also take up less space in a work environment which make them ideal for use with multi-monitor trading computers.

OLED is the Latest Thing

OLED (Organic Light Emitting Diode) is the newest screen technology. It is a direct competitor to LED backlit displays. OLED is brighter, more efficient, and thinner than LED. In fact, they are so thin some models are curved.

OLED monitors generate their own light. The primary downside right now is that OLEDs are way more expensive and not as widely available as LED-backlit. Currently, OLEDs are priced at over $1000 each, although prices are coming down already and will continue to come down, like any new technology.

Another big drawback is that OLED monitors are much more susceptible to image retention (burn-in). Each pixel is driven independently, and the ones that get used the most (like tool bars) will begin to dim before those that aren’t used as much. As technology improves, this is expected to be less of a problem.

LED-backlit displays will continue to provide the best value for traders in the foreseeable future. While it can be tempting to always buy the latest and greatest, even gaming experts aren’t yet recommending OLED.

[notification type=”alert-info” close=”false” ]There are more trading computer tips like this in our buyer’s guide. Check out our “How To Buy a Trading Computer” e-book. [/notification] Remember, we are here to help with all your technology-related questions. If you think of additional questions about computer hardware or other questions, give me a call. My team and I are here to help. We’re happy to answer any of your questions about trading computers via phone: 800-387-5250