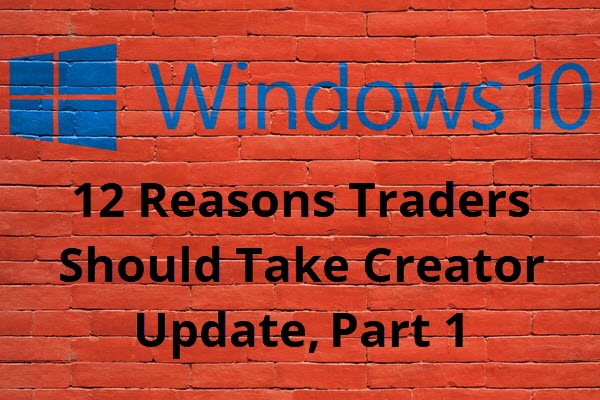 I shudder every time a new Windows update comes out. Especially if it’s recently released. You’d think Microsoft was a big enough company to get it right the first time. But alas, not so.

In fact, the latest update of Windows 10—called ‘Creator’—is already on round 2. The first Creators Update was released in April 2017. It wasn’t really quite finished. At least it didn’t have all the features Microsoft had planned.

So on October 17, 2017, the Fall Creators Update was released as a bigger, better (finished) version of the earlier one. It’s available for free to all Windows 10 users.

This update is called ‘Creator’ because it has lots goodies for creative users (like 3D image creation). While that’s not terribly interesting to the average trader, there are lots of other features you’re going to like.

Most of these features are really just small tweaks. But they can add up to an important impact for the average trader.

I took some time recently and combed through the rather extensive list of updates, looking for those most relevant to the trading community. There are 12 reasons for updating I think you’ll find particularly compelling.

In today’s post, I’m just going to cover the first six. Be looking for my next post where I’ll cover the rest.

The new “My People” feature lets you pin your key contacts to your taskbar so you can pick the person first, then the way you want to communicate, rather than the other way around.

For example, instead of launching Skype and then picking John as the person to talk to, you would pick John in your My People list and then specify that you want to communicate via Skype.

For any one contact, you can see prior conversations, contact information, and options for communication modes all in one place. You can even send an email or enter a Skype message right from the My People window.

Here is an article to get you started: Fall Creators Update Feature Focus: My People

I haven’t been a big fan of OneDrive in the past. If you haven’t looked at it before, One-Drive is Microsoft’s cloud-based file storage solution similar to Dropbox. My objection has stemmed from not wanting Microsoft to have possession of any more information about me than they already have.

However, OneDrive’s newest feature could be a small game-changer. OneDrive now allows you to store files in the cloud which are not stored locally on your Windows 10 PC, thereby freeing up space on your hard disk. This feature is called Files On-Demand.

So what could you do with this?

My suggestion would be to upload space-hogging content such as training videos or PDFs that you want to be able to get to again easily, but which don’t need to be on your hard drive, and don’t need the superior protection of Dropbox.

Specifically what I have in mind is to store content there that you did not personally create, but that you want to be able to access quickly.

And what’s really nice about this scenario is that this content would then be available on any of your devices via a One-Drive app.

Here are a couple of articles to learn more about Files On-Demand and to help you get OneDrive set up properly:

3. Stay on top of graphical resources with Task Manager

Although traders don’t use video resources the way gamers and video editors do, our video resource usage can still be important to us. We traders tend to have lots of chart windows open as we’re watching the markets.

So you’ll be happy to know that you can now keep track of the performance of your GPU (graphics processing unit) as well as of your CPU.

I’ve written in the past about monitoring CPU performance with Task Manager. Monitoring GPU usage is very similar.

Without going into the technical details, Controlled folder access protects your Windows 10 default user folders against unauthorized changes, like those initiated by ransomware.

Ransomware has been around for quite a while. I’ve been warning my customers about it since 2013, but it’s getting more and more prevalent with each passing year. So it’s nice to know that Microsoft is trying to help us out with more protection.

The ability to share files from inside of File Explorer was available in limited form in Windows 8. I never really paid this feature any attention. The most interesting thing you could do was email someone a file.

If you’re like me, when you want to send a file via email, you navigate to your already-open email client, create a new email, and then attach the file you want to send. But you could, if you wanted to, initiate the email from within File Explorer.

(On my PC, this means File Explorer launches an Outlook window, fills in the subject line, enters some boilerplate content, and adds the file as an attachment.)

What’s new in the Creator Update is the ability to share files via other apps. For example, you can now let File Explorer share a file via Skype. So why is that a big deal?

Well, for someone with lots of monitors running, it means you no longer have to deal with the sometimes-tricky process of dragging and dropping a file across multiple screens.

Like the rest of these updated features, it’s a small thing. But a lot of little things can add up to a lot less frustration in your day.

6. Put your hard drive on auto-clean

Do you remember when the Recycle Bin was first implemented? If you’ve been a long-time computer user like me, you’ll remember the loud sigh of relief you exhaled the first time you realized the file you just deleted by accident was sitting safely in your Recycle Bin.

The downside of this life-saving feature is that a whole lot of junk sits there, taking up disk space, until you remember to empty the bin.

With a new Creator’s Update feature called Storage Sense, you can set Windows to automatically ditch the junk on a regular basis. Storage Sense is disabled by default, so you’ll have to be proactive about enabling it on your system.

What’s nice is that Windows has made your spacing-saving options fairly granular. You’ll be able to select which of these options to apply: delete temporary files, delete Recycle Bin files after 30 days, and delete Download-folder files that haven’t changed in 30 days.

Check here for information on how to put your own hard drive on auto-clean.

Be looking for Part 2 in this list of reasons traders should take the Windows 10 Fall Creator Update. In the meantime, if you’ve already taken the update, try out a few of these new features and let me know what you think.